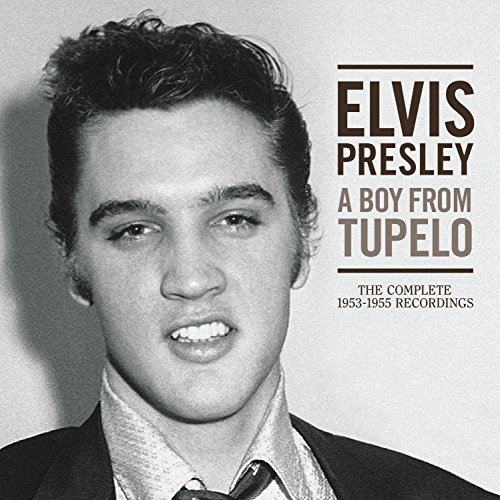 A BOY FROM TUPELO: THE COMPLETE 1953-1955 RECORDINGS is the definitive collection of Elvis’ Sun-era recordings in one comprehensive package.

A BOY FROM TUPELO: THE COMPLETE 1953-1955 RECORDINGS includes on 3 CDs every surviving Elvis Presley Sun master and outtake, plus two private records Elvis paid with his own money to record, as well as all known radio- and concert performances from the period. Many of these recordings are rare demos, session takes, and live performances including a newly discovered and previously unreleased recording of “I Forgot to Remember to Forget” from a 1955 Louisiana Hayride performance.

The accompanying 120-page book compiled by Elvis authority Ernst Mikael JÃ¸rgensen and is, in essence, a fully-illustrated travelogue. It details the birth of Elvis career through facts, anecdotes, documentation, many rare photos, and a succinct narrative. Independence Day 1954 is when this uniquely American saga begins, less than 24 hours before his first professional recording session, and it ends in December 1955, when the rights to Elvis’ Sun tapes officially expire and the singer leaves Sam Phillips and Sun Records to record for RCA Victor.

This is the story of Elvis Presley before he becomes world-famous, and how this amazing young man readies himself for stardom, achieving success on a level that no one could have dreamed possible.